Out to the woodshed with Livestock.Live cattle,feeder cattle and lean hogs all limit down.Too much supply for both.Continued talk of more supply than Processing ability is not good for higher prices but reall good for lower prices.Front month Live cattle will settle below $1.00   for first time in 6 years.Weekly Slaughters continue to increase as Packers margins are still positive,lets  make money while we can.Since  margins are still good why wouldn’t you continue to bring product to market.Some action might be due to month end Plays  but I wouldnt look too much into that.The bottom line is that there is more supply than demand  and in some cases more supply then can be processed into retail product.until market  finds balance,prices should trend lower.

Rumor earlier this morning is that Deutsche Bank’s  fine will be lowered from   $14B   to   $5.6B  .DB has rallied smartly as a result DB   higher=Dax Higher=risk on!.Also helping the Risk on move is Chicago Pmi and Michigan Confidence  revision were both higher than consensus.

In the bond complex  Long end leading treasuries lower.In turn  steeping the yield curve for second day in a row.Inflation worries? or readjustment of Inflation expectations? 1,2,5 and 10 year  Inflation break-even are trading higher today continuing the trend higher.Reuters telling us “chunky algo sales” and  Block trade but of 10k 131.25 Puts in the 10 year complex adding to the bearish pressure.Plus stocks continuing to press higher will lead to lower bond prices.As I mentioned before I will default to Month end/Quarter End  for price gyrations.

Here is a snapshot of  movement  in the Credit default Swaps overnight.All of Europe’s big banks are under stress.Stoxx bank index gapped open lower but has clawed back about half it losses as the sense of panic eases(currently lower by 2.5%).A couple of things that have cause the markets to exhale  .1) Swiss Government has said “*SWISS GOVT TO EASE TAX BURDEN FOR   TBTF CAPITAL. *SWISS GOVT TO FACILITATE ACCUMULATION OF CAPITAL BY TBTF BANKS(TBTF=To Big Too Fail) And secondly The USA could just lower the  $14 Billion fine they levied on DB.The Fine is what started the latest leg Lower in the stock.I believe the fine will be lowered to a  more “manageable level” DB CEO out saying “media speculation causing unjustified concerns”  “bank balance sheet Has never been more stable over past 2 decades”  Dax is currently -.9%  but has rallied roughly 1.3% off a session lows.Spain and Italy both down ~1.8%.We could see some “tape Bombs” today regarding DB but it appears that  the panic maybe over.Spoos only down 2 handles  as the too are recovering losses and sit 2 handles away from session highs.DB gapped open lower  by they too have clawed back over half their losses

Oil followed Stocks lower  and has now followed them  higher.Dont need to repeat story  but I believe a Bottom is in place until  more evidence of actual Production cuts appear.

Not too much in the way of Economic releases overnight.german retail sales beat Expectations,EuroZone Core CPI missed by .1 and a handful of second tier UK data had minor impact on the trade.All eyes on banks  and the fluctuations of DB.

Dollar higher,Euro (-65 pips) yen(-25)  and GBP steady .Gold,silver platinum up a touch  but in no real hurry to do anything.We do get personal spending and PCE Inflation at 7:30.Normally these have little impact on markets.Chicago PMI at 8:42 and U of Michigan Confidence also should not be of much Importance.Month end/Quarter end and banks will be driver of action today

News headlines indicating that hedge fund clients are withdrawing funds and possibly moving assets out of Deutsche bank. Bloomberg saying at least 10 hedge funds could be looking  for a new Clearing firm as Questions about banks solvency swirl.

We have seen a mid morning Sell off in the Dax  which caused  weakness in the spoos and thus “risk”.No one specific reason for selloff,chatter of  hefty sell programs in Dax.  I believe Dax ran into resistance(10570) and when it couldn’t break it sell off occurred.Month end/ quarter end could be blamed also ongoing Deutsche bank worries  as well.This snapshot of the Dax does not show  that prices did print below yesterdays lows,an outside day. 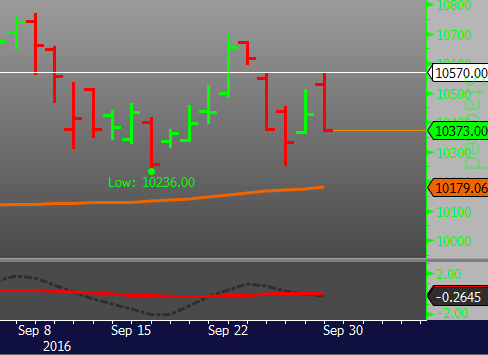 here we have Spoos on a 30 minute chart,it too ran into Good resistance at 2165 before it followed DAX lowered

Oil was sideways for most of day  and that caught a bid as we approached the European Close. December  Brent traded above $50 and WTI Pressed above Yesterdays All session highs.Also helping the Brent complex is worries about a shortage of Diesel.If you recall from 2 weeks ago the Colonial Pipeline  was ruptured.The line 2 which carries Diesel,was then used to carry gasoline.So the USA is a touch short of diesel at the moment and thus less exports going to Europe.Also Refinery issues in Europe making Diesel a little more expensive. Gasoil  crack spread +40% also helping the bid.

A little bit confusing today is the trade in bonds.  Yesterday they ran inverse to Oil,today they seem to be positively correlated.I think the bonds are trading off the weakness in Stocks  and not so much the Run up in oil.

Here is a look  at yesterdays closing prices for top gainers in energy sector.This is how higher oil Impacts the SPX. lets see if we get a repeat today.

What we know so far.

OPEC decided to CUT PRODUCTION  not freeze it at today’s informal meeting.If they do actually follow-up with Cuts it will be the first time in 8 years that OPEC has done this.In August OPEC production was ~33.3 MMbpd  Announcement today lowers production to 32.5 starting in November.Todays Decision is light on Details  as we don’t know  how much Each country will have to cut.Will Iran be excluded from a  cut?or will they Continue to ramp up production and then freeze it in Novemember?Plenty of Questions need to be answered  and time  needed to see if Cuts are actually Implemented.But regardless of the specifics   OPEC announced a production cut,much to everyone’s surprise.

Run up in oil weighed on Bonds,Created a bid into Copper,Commodity currencies and SPX.Inflation metrics also moved to the upside.Higher oil could be a godd thing

This morning has had plenty of  headlines to trade off,  From  Cattle spot trade to OPEC to yellen and Draghi.

Also a political  question from members about  known Clinton Supporter ,Brainard,Will she recuse herself from Discussions?  yellen replied no  as Politics are not   discussed.Dollar has caught a small bid and continues to move higher.This is weighing on Oil and commodity prices.

Draghi speaking to german parliament  was expected to be a contentious affair and it was.Draghi threatened more QE unless Germany back’s  off from continued attack on policy. This maybe weighing on Euro and providing a small bid in bunds.

SPX Shows 10-11 sectors Lower with Energy the only sector showing higher prices,Dax did close the day higher ,+.75%,First increase in 4 days.Stronger dollar and Weaker Spoos gives us a Minor risk off theme today. This could become  A more pronounced move once OPEC meeting over and crude sells off.

Plenty of talk of this low volatility enviroment continuing as the Central bank control of markets gets tighter and tighter.

Setting the pace overnight: Deutsche Bank +2.8% first up day in 4.This has lifted the Dax and European banks. DB sold a UK insurance Unit, They said working on contingency plans to shore up capital and a rumor that Germany will step in help (later denied) have all helped to lift the stock. In japan we have yet to see the BOJ Implement their new “focus on yield curve trade” as overnight reverse auction saw BOJ buy just as longer end as they have done in the past. per BB “Investors who figured it was prudent to decrease duration and, perhaps, do Kuroda a solid in helping his latest policy twist were rewarded with a bull flattener, with 5s30s moving as much as 4bps. Have a nice day” It looks like no Deal today between OPEC members to freeze/cut production. The promises for something at the November meeting are already being stated. It is a nice game they run At OPEC. Yesterday’s API storage numbers showed a larger than Consensus Draw in gasoline stocks this has provided a bid there and also helped the bid in oil.
Treasuries and bunds are slightly lower as “risk on” move in Dax provides some pressure. Dollar sits unchanged but yen lower. The Flattening move IN JGB is also driving action on US treasury Curve.
A handful of Fed speakers today including Yellen, they should be non-events. All scheduled speakers except Mester will speak about non Economy topics. Mester dissented at last meeting and she will speak about the Economy at 3:35 this afternoon. Here is list:
• 9:00Yellen
• 9:15 Bullard
• 10:00 Draghi (after meeting w German lawmakers for first time in 4 years!)
• 12:30 Evans
A few items:
• Rate Hike probabilities back up to 54%
• US senate will push forward a bill for 9-11 victims to Sue Saudi Arabia even though Obama vetoed it
• China declared The USA a loser after Mondays debate
• Soybeans still pressing lower as Support has been given.

By Richard K Breslow
(Bloomberg) — This is the most difficult, treacherous and
damnable investing environment there’s ever been. That’s what
you hear on an almost daily basis. And certainly in monthly
investor performance reports. “The market’s in a dangerous
bubble, now let’s talk about the following stocks you just have
to chase because they’re cheap.”

* We all know there are bubbles galore. That’s called received
monetary policy wisdom. And every time they assure in speech
or testimony that an end is conceivable something conspires
to pull them back in
* The latest policy maker “do as I do, rather than say” was
caused by today’s eyebrow-raising decision by the BOJ to
follow last week’s big discussion on steeper yield curves
with a business-as-usual purchase of super-long JGBs
* Investors who figured it was prudent to decrease duration
and, perhaps, do Kuroda a solid in helping his latest policy
twist were rewarded with a bull flattener, with 5s30s moving
as much as 4bps. Have a nice day
* Therein lies the problem for building a portfolio. We know
the price of most assets are hopelessly distorted, yet
prudence has had a very high price
* For too long a time, traders got by figuring they could
front-run (trust) quantitative easing and disregard the
rest. That game is getting long in the tooth as monetary
policy runs out of gas and policy-makers are trying,
unsuccessfully, to play it by ear. But what to do in
response?
* No one knows and, as a result, a lot of important assets are
confusingly and maddeningly trapped in tight, uninformative
ranges. No one wants to buy, no one can afford to sell and
nobody’s happy
* U.S. 5-year Treasury yields have ground to a halt after a
wild start to the year. USD/JPY, EUR/USD are boring. So’s
gold. Oil’s ranges are narrowing. SPX and SHCOMP have flat-
lined. The only things moving are sideshows like Mexican
peso, which have nothing to do with the global economy
* There’s only instability amongst all this stability. And
that is the treachery of this treacherous market
* NOTE: “Trader’s Notes” are authored by Richard Breslow, a
former FX trader and fund manager who writes for Bloomberg.
The observations he makes are his own and are not intended
as investment advice